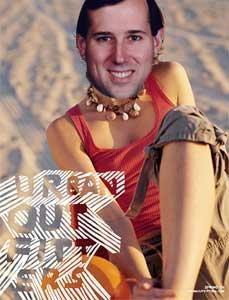 "While the typical Urban Outfitters shopper is likely to be liberal-minded--as is the province and privilege of youth--the fiftysomething Hayne is mom-and-apple-pie conservative. He and his wife Margaret have contributed $13,150 to the campaign coffers of Paleolithic right-wing Republican Sen. Rick Santorum and his Political Action Committee over the years.

Hayne, who would prefer this fact not appear in this story, did not always tilt hard to the right. In fact, he and the retail concern he founded came of age in the heady, longhaired lefty crucible of the '60s. Back then he was vehemently opposed to the Vietnam War, the Nixon administration that perpetrated it and the big business military-industrial complex that financed it.

The times, however, have a-changed."

Maybe it's time to start shopping somewhere else.

UO always had over-priced crap that was too trendy for its own good anyway.