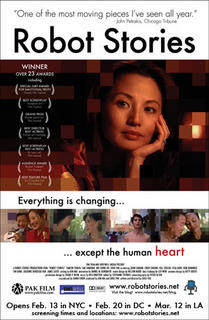 "'A tremendously powerful set of vignettes. Writer/director Greg Pak uses four stories about robots to create wonderfully human moments. The stories are quick and to the point. The visually compelling and well-acted stories do not exist in the same world; tied together by theme, each is its own stirring narrative. Robots as toys, robots as children, robots as office tools, and robots as deceased loved ones teach the humans around them various lessons without hammering the audience. Quiet subtlety abounds throughout these terrific shorts. Even the opening credits animation is a wonderfully self-contained story. Another must-see. '"

Julie Atlas Muz is featured in the "Machine Love" vignette, described below.

The latest component of the digital office, the Sprout G9 iPerson is a walking, talking coding machine programmed to fit seamlessly into its work environment by learning from its human co-workers. But when he finds himself in an oppressive office surrounded by dysfunctional people, a G9 named Archie (Greg Pak) learns just how much he needs love.