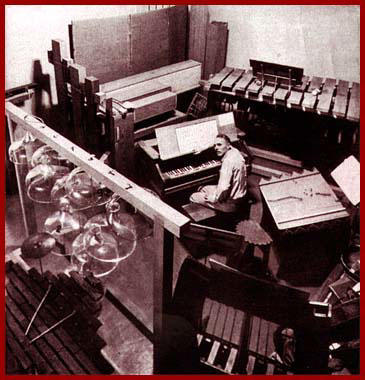 "By 1969, the year he recorded 'Delusion of the Fury,' Harry Partch had designed 27 new instruments, all to be played on stage at the same time in a spatial ritual theater. These instruments were made to be beautiful in sound, vision, and 'magical purpose.' They were tuned according to the natural overtone series, 'Just Intonation' Some, like the Chromelodeon, had as many as 43 tones in a single 'octave.' He made particular instruments for specific needs in his compositions, not the other way around. But, more than this, he designed the instruments to be 'corporeal.' To Partch, corporeal meant to involve the whole body, the whole person in the art."

Listen to an interview and complete performance of "The Betwitched" in vbr mp3.