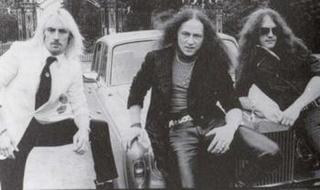 "In 1986, Black Metal legends Venom played what some thought of as an unlikely bill with Rollins-era Black Flag at famed punk dump City Gardens, in scenic Trenton, New Jersey. The club was a magnet for all types of unsavory social elements -- skinheads, criminals, bikers, leather-studded punks, people who liked Meat Beat Manifeto, and so forth. Anyway, the punkers, metalheads, and general thugs who turned out for the show not only got to witness two of the more badass bands of the era sharing a stage, but were also treated to some of the most (unintentionally?) hilarious between-song stage banter ever, courtesy of Venom's knuckle-dragging vocalist Cronos."

Follow the link for more info and the downloadable mp3.