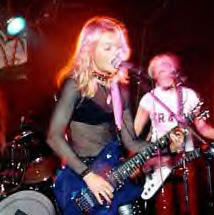 Jane Jensen, actor and musician, has been on mind lately. Tracks from Comic Book Whore have been popping up on my iPod and I'm really rediscovering the album. I also watched her biggest film, Tromeo and Juliet, again the other night. So, I spent some time searching around the net and discovered that it's very hard to find any current info.

She grew up in Indianapolis, IN, and eventually moved to Chicago. She joined two members of Die Warzau to form the group Oxygiene 23. With them, she released an album with Fifth Column; songs on invisible, and compilations on Dragonya. She relocated to New York City, where she released her debut solo album, Comic Book Whore, with Flip Records. She signed with Interscope Records and spent a year-and-a-half recording demos, eventually leading to her decision to record and release her next album on her own. Burner was self-released and sold over the Internet. Jenson also has acted in numerous independent films and theater productions, and has contributed to the soundtracks Citizen Toxie: The Toxic Avenger IV, Tromeo and Juliet, and Crow: Salvation.
[from all music guide]

I'll do my best to bring whatever linkage I can find to you. In the meantime, check out this mp3 from her second album, Burner.