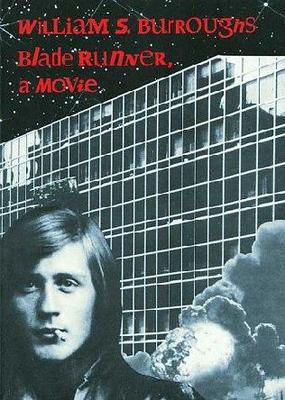 The term "Blade Runner," comes originally from the 1974 novel The Bladerunner, by Alan E. Nourse, in which the protagonist is a smuggler of black-market surgical implements. Nourse's book inspired a script treatment in the form of a novel, William S. Burroughs' Bladerunner, A Movie, but apart from the title, neither Nourse's novel nor Burroughs' had any influence on Ridley Scott's film. Hampton Fancher happened upon a copy of Bladerunner, A Movie while Scott was looking for a snappier title for his film; Scott liked the term and obtained the rights to the title (but not any aspect of the plot). Some editions of Burroughs' book use the spacing Blade Runner.

"In this futuristic screenplay vision of a strife-and-disease-plagued America in 1999, Burroughs finds the cure for a decaying civilization in the medicine practiced by underground physicians and surgeons. These heroic healers, in turn, are aided by 'blade runners,' teenagers who smuggle banned surgical instruments past the watchful eyes of fascistic police. The novel-cum-screenplay follows follows one of these runners during the course of a race riot and the transfer of instruments between embattled doctors. Above the drama in the streets of New York is a world 'taken over by hang-glider and autogyro gangs, mountaineers and steeplejacks. A sky boy steps off his penthouse into a parachute on guide wires that drop him to a street-level landing...Meanwhile, released animals and reptiles from the zoo and freed fish fro the aquarium have control of the rovers and subways. The prose flashes with Burrough's own brand of outrageousness and fantasy."

Does anyone know the name of the movie based on this story? I'm not refering to the well-known Ridley Scott movie. There was actually a movie (TV or theatre I don't know)based on the Nourse-Burroughs story, but I just can't remember the title.