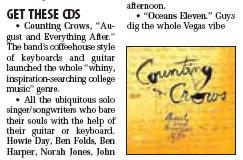 In a piece about "essential pop culture for college" in Today's AM New York, Ariel Alexovich seems out of touch. A few mistakes suggest that the author has not actually consumed some of the very things he is recommending. But, the bit that really exposes a lack of pop culture awareness is the suggestion that a 1993 album by Counting Crows is a must-have for college students.

Perhaps I'm an old man who is out of touch--I was in high school, after all, when "August and Everything After" was released--but, it seems to me that Crows are mostly known today as "the band with the stupid hair that recorded that Shrek song."

Then again, college kids today listen to so much adult contemporary crap...oops...I mean Dave Matthews Band, that Counting Crows could seem like craa-aaazy party music to them.

Eh, maybe you have a point, but I remember the album from college and it was pretty good. It could be said that album made a niche for post-grunge music in the early '90s. Matchbox 20 definitely owes a debt to them I think.

Is it a "must-have" album? Maybe not. But it's better than some of the crap out there now.

i'm not commenting on the quality of the album, just the likelyhood that any college freshmen would like it or own it or even have heard it.

Fluffy> Counting Crows may be better than some crap, but they're still crap.
Fluffy> one-hit wonders, if that
Fluffy> not influential, not revolutionary, I'm sure they got some airplay, but I don't think they deserved it
Hugh2d2> No, they are one of the greatest bands of all time. (Recovering the Satellites is my personal favorite though.)
Fluffy> like most alterna-cookie-cutter music they play on the alterna-cookie-cutter radio station
shigpit> I'm in between Fluffy and Hugh.
Hugh2d2> Listen to RtS. It's a great 90's album.
Hugh2d2> Not one song on there that's not emotionally moving.
shigpit> I think they opened up the door for those bands in the post-Nirvana era, but they were not the best of them.
shigpit> See: Better Than Ezra, Matchbox 20.
glitch p-udding> but, i can't imagine any of you think all college freshman do is listen to this album all day
Fluffy> horrible
Hugh2d2> They absolutly ushered in the emo-alt wave that came after them. (If that's good or bad is for another discussion.)
Fluffy> I seriously doubt that CC is like a perrenial fave with college students
glitch p-udding> i think they're a decent band....if a bit overdramatic....but i hardly think they pioneered anything
Hugh2d2> By now they are probably considered Adult-alternative. What ever the hell that means.
Hugh2d2> :)
shigpit> iAlternative.
thatmikeykid> he pioneered conservative dread0ism
glitch p-udding> adult alternative = any music adults listen to that is better than kenny g
Fluffy> it means they didn't take any risks and were trying to cash in on a fad
shigpit> Fluffy, they're not acoustic alterna-zydeco if you're looking for that.
glitch p-udding> yeah. i always saw cc as followers, not leaders. i happen to like the song 'around here' quite a bit...but everything else i've heard could be done by about 1000 other bands
shigpit> The thing is in 1993 everyone was trying to be Nirvana.
glitch p-udding> pearl jam, smashing pumpkins, nirvana, etc. all hit the scene in that timeframe, but before cc, and they're certainly mopey-angsty-college kid music
Hugh2d2> Exactly Shiggy. CC didn't do angst rock. They did Emo rock. Touchy feely, the girl broke my heart and I suck rock. Not I hate you , hate my family, hate school rock.
Fluffy> yeah, wuss rock
Fluffy> it is possible to work in that genre and still do something with it
Fluffy> it's possible to have style and substance, or at least to have personality
glitch p-udding> i think each and every band that wears the brand "emo", whether willingly or unwillingly, would wretch at the notion that they have anything in common with cc, and especially at the notion that cc ushered in their era
Fluffy> cc just always struck me as vapid pop music
Fluffy> I don't view them as seminal at all.
shigpit> neither do I, fluffy.
glitch p-udding> no. there's nothing seminal there.
shigpit> Well, Adam Duritz dated Jennifer Aniston but I never asked if they got seminal.
glitch p-udding> yeah...i'm thinkin jennifer chose not to go to bed with pineapple head